The media barrage concerning the rebel held areas of Aleppo is in stark contrast to the silence regarding the government held areas. Similarly, the slaughter of children in Gaza was met with an equally indifferent media. The destruction of Gaza (the most recent attack known as Operation Protective Edge) resulted in the deaths of hundreds of children, but I can’t recall the media requesting a no fly zone over the trapped occupants. Unlike the recent ceasefire and safe corridors being created in Aleppo, the people of Gaza had no escape. 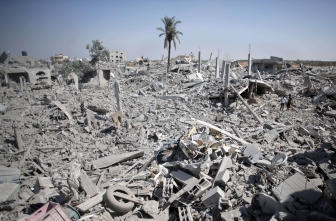 The image on the left is Aleppo and the one on the right is Khuza’a, Gaza.

The destruction that has taken over 5 years to create in Syria was done in a matter of weeks to the tiny area bordering Egypt and Israel. Not once did the US demand the Israelis should stop the onslaught, media coverage was largely pro Israeli, blaming the democratically elected Hamas of instigating the escalation. Curiously, the blame for a vicious cruel, and barbaric armed uprising is not directed at those who attacked the Syrian people but the government for trying to stop it. If Mr Kerry wants to observe a parallel universe, he need only look back at the crimes he didn’t try to stop.

So why do the media react so differently when allegations of war crimes are made?

First of all, Israel in not an impartial observer. They have been supporting terrorist elements from the start of the bloody war in Syria. They have admitted to preferring ISIS on the doorstep to Assad. They have treated hundreds of injured Al Nusra terrorists in their own field hospitals. They have attacked Syrian assets to improve the chances of extremist success and even given the Jihadists air support. Weapons have been supplied to ISIS and radio jamming of the Syrian forces communications equipment has been widespread.

In a brief BBC report this morning, the US have condemned an Israeli announcement of new settlements. Routine condemnations don’t change Israeli policy and it’s only lip service anyhow. The BBC only reported it because it’s the minimum they can do to avoid accusations of totally ignoring the never ending crimes against the Palestinians.

Do the Israelis and pro Zionists control media output? No, although many of the major outlets have influential individuals of Jewish descent at the helm, they would have to conspire to create such a level of agreement. So it must be journalists creating the indisputable bias? Consider this, if an employer is unhappy about the work an employee produces, the latter will try to improve and if required change the way he does the job. The media is a cut-throat industry and journalists rely more on social media than they do on actually getting out and about to discover more details about a particular event. In effect, it means that the modern, relatively unknown journalist is very easy to replace and so if they don’t get the ‘right’ angle on a story, they could be out of a job.

The outspoken Zionist, Alan Dershowitz has admitted that many industries and government departments have a lot of Jews in prominent positions (in America) but he insists they just happen to be Jewish and don’t allow it to influence their decisions. I’d give him the benefit of the doubt but the reality tells us that Israeli criticism in the mainstream is only widespread when they commit a particularly heinous crime on the Palestinians. All the daily misery including house demolitions, unnecessary check point adherence, the grossly unfair military hearings and a host of other discriminatory policies are routinely ignored. Most people are unaware that some West Bank residents might spend the greatest part of a day waiting in line at a check point that has no security value for the Israelis whatsoever. It’s not about security, it’s about making Palestinian lives intolerable.

So, bearing all this in mind and taking into consideration that Netanyahu has admitted on numerous occasions that Assad should go, is there a pattern in the reporting of deaths in rebel held areas to that of deaths in government held areas and to that of Gazan deaths at the hands of the Israelis? Are they given equal prominence? Why are the Palestinians to blame in Gaza (even though they are effectively in a huge prison) yet ISIS/Al Qaeda are the victims in Syria (even though they have had numerous chances to leave Aleppo)?

The main stream media (collectively) have concluded that the average person is either too lazy, too busy or just not interested in discovering the truth. Up till now, they are generally correct in that assumption but as peoples lives are adversely affected by events on the other side of the world, hopefully this will change. The US is going through an extremely difficult time domestically, yet they have just promised Israel $38 billion over the next few years, predominantly for weapons. Meanwhile, we in the UK are enduring a reduction in social service funding that includes having to turn street lights off at night. Strangely enough, we still have enough money to participate in the murder of Syrian soldiers for the benefit of ISIS.

Hang on a minute, I thought we were in Syria to fight ISIS?