This war will end much closer to home.

If the US carry out their threat of attacking Syria, the result is uncertain. Russia, having their military personnel amongst almost every significant department in Syria, warned the US of this fact and stressed that any attack will be regarded as being on Russia too. The Putin government have never warned the US in such stark words. The source of any attack will also be targeted which means the US navy. Have people any idea what this actually mean?

If Russia attack any US forces, there can be only one result, World War III. US allies in Europe will be the first targets if the war became nuclear. Russia can most likely sink this island of ours in the time it takes blundering Trump to type a tweet.

This isn’t a war that will kill only tanned skin people in a far away place. It will come here. It will be us that are terrorised. At seeing the UK being bombed many parts of the world would say, ‘there is some justice after all’. There is no doubt that British collusion with the US will give them the courage to act. Bush wouldn’t have dared threaten Saddam without Blair. Cameron, not Obama was largely responsible for Libya, along with the French midget Sarkozy.

The British will see the effects of carpet bombings at close range. That’s if Russia don’t go nuclear, then of course the area where I live will be flattened in no time due to it’s RAF connections. This isn’t a game with a President who barely knows what day it is. John Bolton is there now and Trump is stupid but Bolton is a raving lunatic.  Think ‘Israeli on steroids’ and that gives an inclination.

The accusations against Assad have been formulated by one of the most extreme terrorist groups in Syria. The Douma militants are so crazy they have struggled to find a place to take them after they evacuated. They wanted to stay there and have their own community but Assad said no. These people have fired missiles at Damascus and killed thousands of innocent Syrians over a period of years. No one wants them because they are scum. But hang on, they just gained credibility. Donald Trump and his bunny boiling sidekick, Nikki Haley have believed every word from these lunatics who have vowed to kill any Christian in Syria and all the Muslims that don’t agree to their warped idea of Islam.

Taken on face value, the accusations have as much credibility as Alice In Wonderland. I don’t suppose its that much of a shock that drippy Trump and his intelligence absent, sycophantic pals consider the head choppers as being credible witnesses. Even the Skripal story has slightly more substance, although we still aren’t certain that it wasn’t a touch of food poisoning.

This is in absolute contrast to Gaza. Press journalists have been deliberately targeted and many innocent protesters been executed by IDF snipers. Where is the outrage from Donald Trump over this? What has Nikki Haley said about it at the UN? 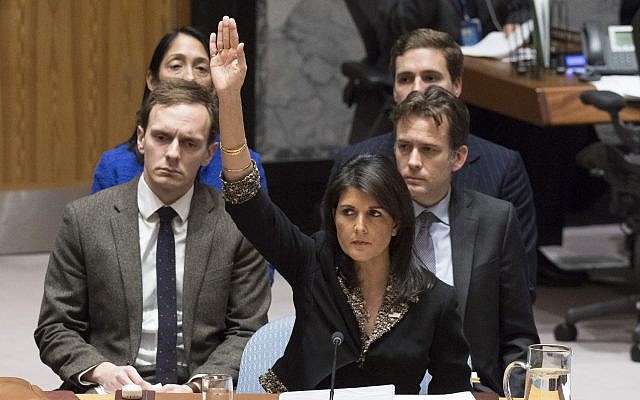 This what Nikki Haley looks like when she is vetoing a UN Security Resolution that all the other members agree on.

The Times of Israel stated:

Last Saturday, the US blocked a similar draft UN Security Council statement urging restraint and calling for an investigation of clashes on the border, diplomats said.

So let’s get this straight. Israel can use Palestinians for live target practice because they are getting too close to a multi layered security fence, with almost zero chance of getting over it and they aren’t even criticised for over reaction?

The first of the two drafts were to urge restraint and to investigate clashes. So Haley doesn’t want Israel to show any restraint and certainly doesn’t want an investigation into the ‘clashes’. So why is it fine for Israel to kill unarmed Muslims but not ok for Assad to kill them? Neither of the alleged slaughters are acceptable, however we have irrefutable evidence for one and the statements by a terrorist group that is so bad, it is shunned by other terrorist groups to support the other.

Put in US terminology, Israel have been caught executing unarmed civilians and journalists and it’s a slam dunk. Evidence for Assad atrocity? None, except grainy footage that can neither be verified nor timed and dated. Witness statements from people you wouldn’t allow to look after your worst enemy.

Theresa May should be warned not to get involved with this stupidity. If it goes to a Parliamentary vote, it’s highly likely to be approved because of the treacherous Blairites still prominent in the Labour Party but it wouldn’t be wise to cling on to the lunatic Trump and his push to war.

The criminal Blair ignored public opinion when he was in power. Cameron (after Libya) did the right thing and his war mongering was rejected. If Theresa May tries this, it will be the end of her. Conservatives with political ambitions will use the opportunity to get rid of this liability of a Prime Minister.

For anyone interested in how the Judeo-Christian world will view a nuclear world war III, Google ‘End Times’. The frightening thing is that some people anticipate and welcome the event.

One thought on “On the eve of destruction.”