UN vote on the investigation into the most recent Gaza slaughter reveals Israeli grip on British politicians.

In a recent vote at the UN, the UK has abstained in a vote to decide if Israel should be investigated for the recent massacre of Palestinian protesters at the Gaza internment fences. The threat was minimal to the Israeli military and general population but they exaggerated the danger and subsequently murdered over a hundred Palestinians, including children and clearly marked journalists. 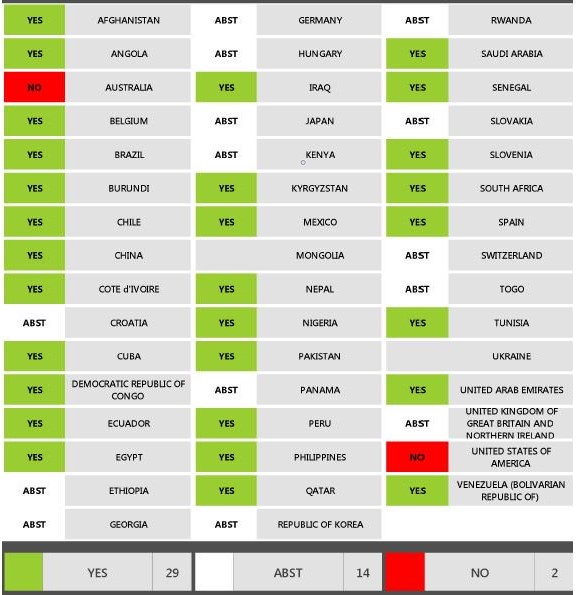 The result of this UNHRC vote exposes the cowards and hypocrites.

As well as the dozens that were killed, the injuries that many protesters sustained were life changing, including over forty that lost limbs due to the type of bullets being used. The protest was known about well in advance, as was the method Israel would use to maximise the number of victims. Snipers equipped with particular tissue damaging rounds resulted in horrific injuries to many of the unarmed Palestinians. The stone throwing and slingshot firing youths were never going to inflict harm on any of the Israeli snipers huddled behind earth and sand built defences, they were too far away to hit them. It didn’t stop the lying Netanyahu from claiming they were facing a serious uprising.

The government voted to appease a foreign entity, Israel, instead of doing the ‘right and proper’ (a phrase our politicians frequently use) thing, which would have been to approve an independent investigation into the actions of an ‘ally’, suspected of a war crime. If Syria were accused of this type of atrocity and not Israel, Theresa May wouldn’t call for a UNHCR investigation, she would simply fire cruise missiles. The contrasting responses reveal the identities of those who believe that international law is for others to adhere to and demonstrate the arrogance of the West in general.

Most people who are familiar with the behaviour of the Israeli government know that they often use ‘defence’ as a reason to kill as many Palestinians as they can. Much as their claims about the threat of Iranian assets in Syria, they never prove the authenticity of these perceived dangers. We are expected to believe the word of a proven liar – Netanyahu.

Tactical and measured evacuation of Gaza.

It was in 2005 when Israel decided to give up on their illegal settlements in Gaza. The passage of time has revealed why they did. It wasn’t, as they claim a concession to further the (completely bogus) peace process, it was a cynical move to make Gaza easier to control and imprison the 2 million trapped Palestinians.

Coordinated deceptions by US and UK pro Israel groups

During Jeremy Corbyn’s entire political career, he has been a consistent critic of Israeli treatment of Palestinians. It has nothing to do with anti semitism and everything to do with human rights. To try to subdue criticism of Israel, groups like the BoD and JLC attack honest people like Jeremy Corbyn, claiming he has anti semitic tendencies and has an ulterior motive, confirming (in their view) his ‘hatred for Jews’.

These people are slaves to Israel. Supporters of the Zionist entity finance these bought politicians in order to pave their path to power. UK organisations Labour Friends of Israel and Conservative Friends of Israel immediately attack, citing anti semitism as the real problem. No, if you want to create resentment, hatred and bloody minded defiance in a community, treat them exactly how the Israelis treat the Palestinians.

Apart from the fact that the real threat to most people in this country is our road system, the best way to reduce the tiny chance of us being murdered by a ‘terrorist’ would be to stop supporting Israel. Cancel any trade agreements, cease diplomatic relations and begin a sustained South Africa type campaign to force them to stop treating Palestinians as lower life forms. It’s not just the Israeli politicians, it’s the vast majority of Israeli Jews who are either blissfully unaware of the conditions their government is inflicting on Gaza and (to a marginally less degree) the West Bank, or they simply don’t care.

The only way to change their supremacist attitude is to make them understand that it wasn’t acceptable in the 1930s and 40s and it isn’t acceptable now. To neutralise the criticism of the Israeli military, a vociferous campaign here in the UK is being used to compare the injury inflicted on a stone thrower in Gaza (in which he loses a leg) can somehow be compared to anti semitic graffiti at a train station. Treating anyone badly because of their race, religion or nationality is abhorrent and should be tackled at every level but trying to conflate school playground insults as a serious threat of harm is patently spurious. The actions of Palestinians desperately fighting for their very existence being compared to a Jew overhearing an insulting remark from a bigot is stretching reality. Condemning Israeli treatment of Palestinians is interpreted as being a raging anti semite according to some warped minds and that’s how they attempt to silence us. People are increasingly weary of this inference. Not knowing if your home and land will be stolen from you in the name Zionism is infinitely worse than a bit of name calling.